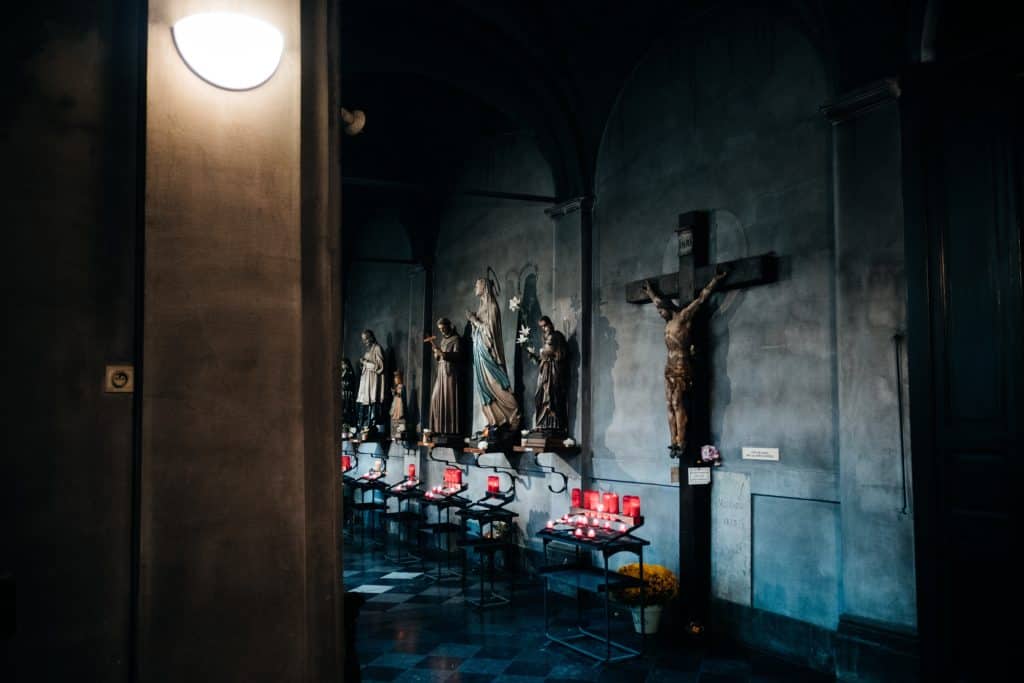 Why do Catholics pray to saints? Why do Catholics worship Mary? These questions and others like it stem from confusion about a Catholic doctrine called the Communion of Saints. The Communion of Saints is the belief that every living Christian is connected to every other member of the church, whether alive or dead, through Jesus Christ.[widgets_on_pages id="In Post Ad"]

According to the Catechism of the Catholic Church the communion of saints is “all the faithful of Christ, those who are pilgrims on earth, the dead who are being purified, and the blessed in heaven, all together forming one Church…in this communion, the merciful love of God and his saints is always [attentive] to our prayers” (CCC 962).

We have this connection because, as Jesus tells us, God “is not God of the dead, but of the living, for to him all are alive” (Luke 20:38). Because all of those who have died in friendship with God are alive in Christ, and we are also alive in Christ, we are connected in a very real way. As a result, it is possible to pray for the dead in purgatory and to the dead in heaven.

Praying for the Dead

There is a tradition even before Christianity of offering prayers for the dead. We can see this in the second book of Maccabees, one of the books in the Catholic Old Testament. Judas Maccabeus was a Jewish military leader who led a revolt against the Seleucid kings who persecuted the Jews in the 2nd century BC. After a battle, Judas and his companions went to gather the bodies of their fallen comrades for burial. However, they found amulets to pagan idols under the tunics of the fallen dead. The Jewish law forbade this, and Judas and his companions realized that their comrades had died for this sin.

Then Judas prayed for the dead:

Turning to supplication, they prayed that the sinful deed might be fully blotted out. … He then took up a collection among all his soldiers, amounting to two thousand silver drachmas, which he sent to Jerusalem to provide for an expiatory sacrifice. In doing this he acted in a very excellent and noble way, inasmuch as he had the resurrection in mind… it was a holy and pious thought. Thus he made atonement for the dead that they might be absolved from their sin. (2 Maccabees 12:42-46)

Although this passage comes from a verse that Protestants do not consider Scriptural, it at the very least shows that among the Jews there was a tradition of praying for the dead even before Jesus came.

The Catholic Church teaches that you can offer prayers for the people in purgatory. Although purgatory is never named in Scripture, there is Biblical evidence for this belief. Every Christian has probably prayed for an earthly friend at some point. We can also pray for our friends (and strangers) who have died. The only thing left that they need is to enter heaven, so all we need to pray for them is that they be purified of their sins and quickly enter heaven.

What is a Saint?

The Church also teaches that just as you can turn to your friend and ask him or her to pray for you, you can also ask a saint in heaven to pray for you. Again, this is possible because those who have died are still alive in Christ.

Although we usually think of canonized saints when we think of saints, anyone in heaven is a saint. So a Catholic could pray to Mary, St. Francis of Assisi, or her own grandmother. Catholics are not required to pray to saints, but it can be very helpful to have heavenly intercessors! After all, we don’t hesitate to ask our friends on earth to pray for us.

It might sound like Catholics have a great system… except that the Bible forbids talking to the dead. In the Old Testament book of Deuteronomy, it says:

Let there not be found among you anyone who … consults ghosts and spirits, or seeks oracles from the dead. Anyone who does such things is an abomination to the LORD (18:10-12).

As we saw in 2 Maccabees, however, some pious Jews prayed for the dead even before the Catholic Church began. Praying for the dead is not a Catholic invention.

The Catholic practice of praying to saints is based on the way in which saints are still alive in God, the God of the living. Catholics don’t think that the dead have special powers we might invoke, or that the dead have special knowledge we might seek. We merely know that those who have died are still our brothers and sisters. They still care for us. Because of their union with God, they probably even care more for us, and certainly with a purer soul, than they ever could on earth.

Furthermore, praying to the dead is simply asking for their intercession. Catholics are not consulting them or seeking oracles. It is clear that praying a rosary is very different from hiring a medium to channel the spirit of Jesus’ mother. No one would make a reality show called “Long Island Rosary.”

It is the same with praying to those we personally know who have died. Asking your departed father to be with you on your wedding day is different than trying to conjure up his presence. Even something like saying, “Dad, what do you think I should do?” is not at all the same thing as seeking a medium to tell you what your dad thinks. Common sense can tell the difference.

The Gift of the Communion of Saints

Thanks to the great gift Jesus has given us, our relationships don’t have to end when our loved ones die. We can even form friendships with the saints who have gone before us whom we never knew in this life. We can also do good for the dead through our prayers. Jesus always invites us to expand. Friendship with Jesus calls us out of ourselves and into relationship with so many others. And that includes the whole Church, those on earth, in purgatory, or in heaven.