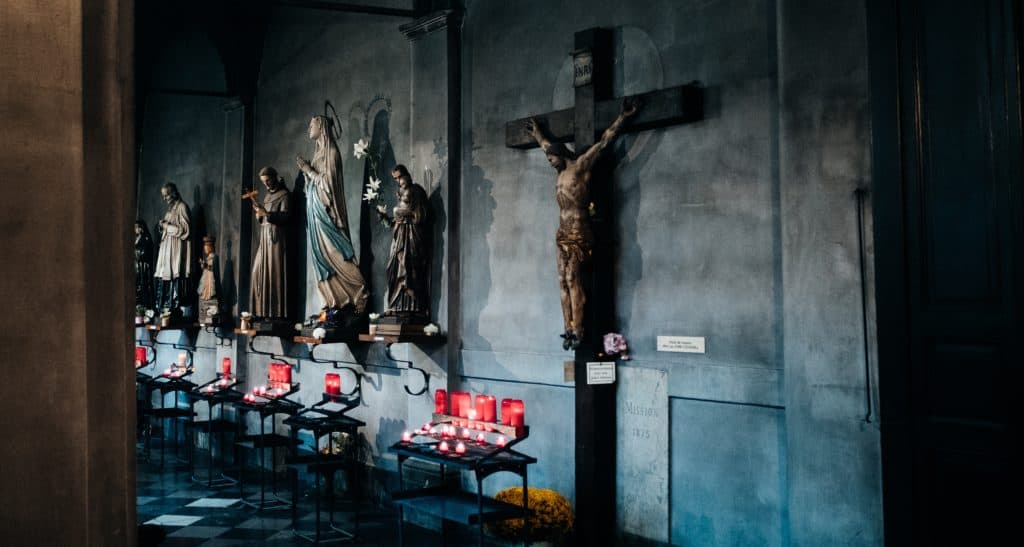 “Saints are only sinners who keep trying.” Those are the words of Saint Teresa of Calcutta (also known as Mother Teresa).

What wonderful consolation is found in those words. It speaks to God and His unfathomable mercy and His strong desire that we not be condemned but be saved.[widgets_on_pages id="In Post Ad"]

God’s desire is not to condemn us. We are not sinners in the hands of an angry God who is waiting to punish us. Rather, we are sinners in the arms of a God who loves us and is eager to forgive. Even more, God desires to lead us out of sin and transform us into the saints he has called us to be.

When you reorient your thinking to this reality, you may find the hope you need to finally overcome that daunting weakness that seems to conquer you over and over again.

Are you discouraged that you seem to confess the same sins over and over? Don’t be! The road to holiness is often long and difficult, and what matters is that you’re moving in the right direction. It would be really concerning if every week you came into the Confessional with a whole set of new sins you hadn’t committed before!

If you’re confessing the same things year after year with no improvement, that is cause for concern. But even if you commit those same sins, but do so less frequently, you’re growing. And as you grow closer to God, you will find that you put certain sins behind you and become aware of new areas to work on.

Don’t give up. God is on your side. He loves you with a love unfathomable and inexpressible. God wants so desperately to save you that he willingly suffered the most unspeakable pain on the cross for your salvation. He loves you so much that he wants to adopt you into his family. The Word, the Son of God, united himself to our human nature so that we could have an intimate union with God. As we become brothers and sisters of Jesus, we become children of the Father.

Remember this when you feel like you should stay away from Confession, Mass, or prayer because you are ashamed of your sins. It is precisely your unworthiness that should cause you to run, with the greatest haste, to the font of mercy.

Saints are like us. Of course they are! They are human. Aside from Mary, the mother of Jesus, every saint struggled with sin. And just like the saints, each of us has a call to holiness. It might seem like God has a lot of work to do to make you and me saints when we see the humble service of St. Teresa of Calcutta, the deep theology of St. Thomas Aquinas, or the joyful poverty of St. Francis of Assisi. For many of us, those are examples that are hard to follow. The good news is that you are not called to be St. Theresa, St. Thomas, or St. Francis. You are called to be the saint that only you can be.

In their lifetimes, Mother Theresa, Thomas Aquinas, and Francis of Assisi were famous. But even the greatest saints sometimes live seemingly unremarkable lives. St. Therese of Lisieux is one of the most famous saints of the modern age, but it wasn’t until after her death that she became known outside of the convent where she lived.

Another “ordinary” saint is Blessed Pier Giorgio Frassati. He was an athlete who had many friends and was fond of practical jokes. He also helped the poor and worked for social reform in Italy. When he died at the age of 24, his family was shocked at the thousands of poor people who came to his funeral.

Although Therese and Pier were devout from their youth, not every saint started that way. The most famous example of a repentant sinner saint is probably St. Augustine. He lived a sinful life and had a difficult time putting sin behind him, but he became one of the greatest theologians who ever lived. St. Francis of Assisi pursued earthly pleasures during his youth until he experienced a conversion after he was captured in battle and became sick.

Jesus came to earth to save sinners and transform us into saints.

This treasure trove of mercy and grace is the very cornerstone of our Catholic faith. God gives us the tools to be able to do what we simply cannot do.

For God, who conquered even death, saving you is a piece of cake. Please don’t give up.