Contrary to popular belief the Bible was not written by God dictating to the human authors to write what he said word-for word. Rather, the Scriptures are inspired by God. The Holy Spirit guided the authors to be moved in such a way that their writings were of God.[widgets_on_pages id="In Post Ad"] 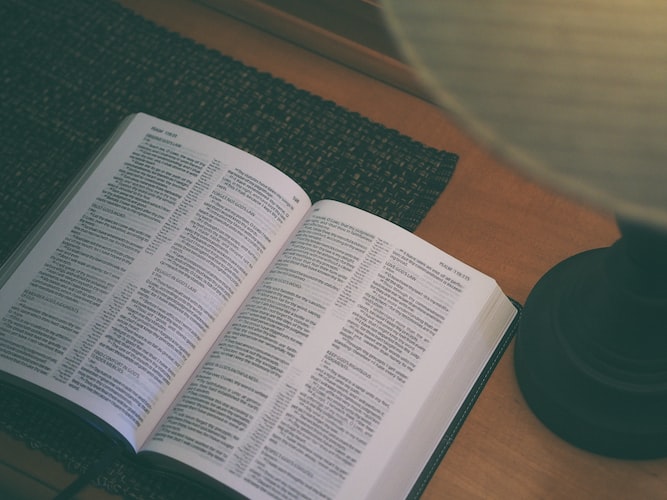 Just as we humans participate in God’s ongoing creation through procreation, we also had a part in creating the Scriptures. God and his people have always worked side by side. God chose Mary to bear Jesus. The prophets brought God’s message to Israel. Jesus sent the Apostles on a mission to preach the Gospel to the whole world. The message that God wants conveyed is contained in the Scriptures, but the way in which it is conveyed was left up to the specific authors.

The Bible is the written account of the human experience with God. Many parts of the Bible are oral tradition that was written down. Most people were illiterate and relied much more on their memories to pass on traditions and stories. Oral tradition was the norm long before writing and reading was popular.

Different books have different histories. For example, Genesis likely involved many sources passed down over hundreds of years. Paul’s first letter to the Corinthians has one human author (Paul) and was written within 30 years of Jesus’ death and resurrection.

Furthermore, different books of the Bible belong to different genres. Obviously, a New Testament epistle is a letter. 1 and 2 Samuel were histories. The Song of Songs is a love poem. The way in which the author wrote was due in part to the genre in which he wrote.

What belongs in the Bible?

There was no Bible as we know it for the first 350 years of Christianity. Jesus did not give his Apostles a list of the books of the Bible (also known as the canon of Scripture) before he ascended into heaven. Rather, the early leaders of the Church, guided by the Holy Spirit, discerned which books belonged in the Bible. This process took centuries.

Some criteria for determining the canon of Scripture were as follows:

The first official list of Scriptures was compiled in 393 at the Council of Hippo, then again in Carthage in 397 and 419. The universal Church accepted this canon and used it without controversy for over 1000 years. The Church did not infallibly define these books until the Council of Trent, when it was called into question by Martin Luther and other Protestant Reformers, in 1556.

The Church has always used the Septuagint as its base for the Old Testament. The Septuagint has a few more books than the later established Masoretic texts. Many of these books were written in Greek by Greek-speaking Jews in the Mediterranean region. The other books were translated into Greek. Many Jews living outside Israel did not know Hebrew, and it was important to them to have Scriptures they could read. The Apostles wrote in Greek and used the Septuagint in quoting from what we now call the Old Testament.

The Masoretic text was in Hebrew and the Masoretic canon was set by the Jews in Israel after the Christians accepted the Septuagint version as their Scripture. When Martin Luther established the canon of the Protestant Old Testament, he decided to use the Masoretic canon.