One thing that many people find difficult to understand about the Catholic Church is the Church’s emphasis on Mary. Why would we say “Hail Mary” and pray the Rosary when we could be talking to Jesus? Doesn’t that go against the meaning of the Gospels, where we learn that we must love Jesus above all else? Why should we have such a prayer to Mary?[widgets_on_pages id="In Post Ad"]

Why Do Catholics Say ‘Hail Mary’?

The phrase “Hail Mary” is actually biblical! Take a look at Luke 1:28. The following are various renderings from various translations of the Bible:

The angel went to her and said, “Greetings, you who are highly favored! The Lord is with you.” – NIV

And the angel came in unto her, and said, Hail, thou that art highly favoured, the Lord is with thee: blessed art thou among women. – KJV

And coming in, he said to her, “Greetings, favored one! The Lord is with you.” – NASB

And he came to her and said, Hail, O favored one [endued with grace]! The Lord is with you! Blessed (favored of God) are you before all other women! – Amplified 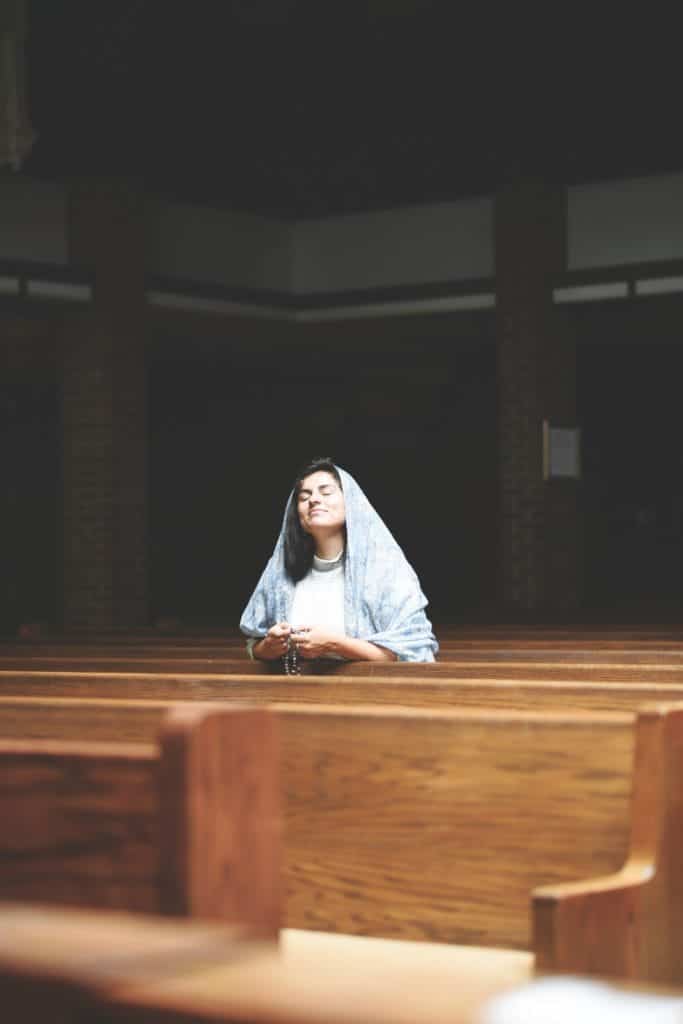 There are common themes among the various translations. Let’s compare.

It seems that the spoken part by the angel Gabriel starts off with a greeting – “Hail” in some translations “Greetings” in others. The Latin word for this is “Ave.” In the original Greek, the word is “Chaire,” which is a common greeting in Greek. Each translator (or group of translators) translates the original text into English based on his or her preferences and the needs of the audience. For example, “hail” is not a typical greeting people use today, so many newer translations use the word “greetings” instead.

As with any translation, translating different words can have slightly different connotations. Saying “hail” to someone seems more formal than saying “greetings.” But the term “Hail Mary” is not an attempt to elevate Mary above Jesus. It is simply that when we speak to Mary, as the angel Gabriel did, we greet her by name.

How is Mary “Full of Grace”?

We see in that same verse that Gabriel calls Mary highly favored (by God). Another translation we might see is “full of grace.” That means that the first part of the Hail Mary, “Hail Mary, full of grace,” is straight from the Bible. The word Gabriel uses in Greek is kecharitomene, from a verb meaning “to give grace.” Here a little Greek lesson is in order. This is a perfect passive participle. Passive means that something is done to the person. So Mary is not giving grace to someone else. Instead, she is given grace. The perfect tense denotes past action. In Greek, there are several past tenses. The perfect tense denotes past action with continuing effects in the present. So what Gabriel is saying to Mary is that she was given grace in the past and the grace she was given continues with her to the present time.

This is where Catholics find biblical evidence for the Immaculate Conception. Mary is uniquely graced from the very beginning of her life and maintains that grace throughout her entire life.

We also see in Luke 1:42 Elizabeth addresses Mary, saying, “Blessed are you among women, and blessed is the fruit of your womb.” Again, this is directly found in the Hail Mary. It is becoming clear that the Hail Mary does not contradict the Gospel message. Instead, it is a profoundly biblical prayer.

But why is Mary holy or favored?

Mary is considered of such high favor with God and Elizabeth recognizes that she is special because of Jesus. She is blessed because the fruit of her womb is blessed. Mary was chosen to bear Jesus by God, so God singled her out from many, many other women on the planet. Elizabeth recognized that she was bearing the son of God and so recognized that she was special. In fact, the Church teaches that Mary was immaculately conceived because of her mission to bear Jesus in her womb. It was a grace given to her because of her connection to Jesus.

Why is Mary mentioned so much?

Without Mary’s free acceptance of her calling from God we would not have Jesus in human flesh. Also, the fact that Scripture refers to her in such a special way is good enough reason to talk about her. Even so, Mary is not the core component of faith. The core of Catholicism is Jesus, not Mary. If anyone puts Mary before Jesus, that person is not following the Church’s teaching about Mary.

However, we cannot simply neglect Mary. She plays an integral role in the redemption of the world. She said yes, and because of her “yes,” Jesus was born and redeemed us. One cannot simply talk about Jesus without being grateful to his mother.

Catholics do not put Mary on par with God; we just recognize the role she played in Christian history. Mary is certainly worthy of reverence, but not worship.

The Hail Mary is not a prayer of worship, but it is a recitation of Scripture and then an asking of her to pray for us to God; much like asking our other Christian brothers and sisters to pray for us.

Does Mary distract us from Jesus?

Furthermore, Mary always points to Jesus. John 2:1-11 tells the story of the wedding feast at Cana. John mentions that Mary was at the wedding, and “Jesus and his disciples had also been invited to the wedding” (2:2). This implies that Mary was the primary guest, and Jesus was invited because he was connected to Mary. Likewise, when we invite Mary into our lives, she always brings Jesus with her.

When Mary becomes aware that the bride and groom have run out of wine, she immediately intercedes for the couple, bringing their problem to Jesus. She tells the servants, “Do whatever he tells you” (2:5). Likewise, Mary always tells us to do what Jesus tells us, and she brings Jesus to us so we can hear his voice telling us what to do.

Mary does not distract from Jesus at all! She always points to Jesus and brings Jesus to us, just as she brought Jesus into the world by saying yes to God’s invitation to bear Jesus in her womb.