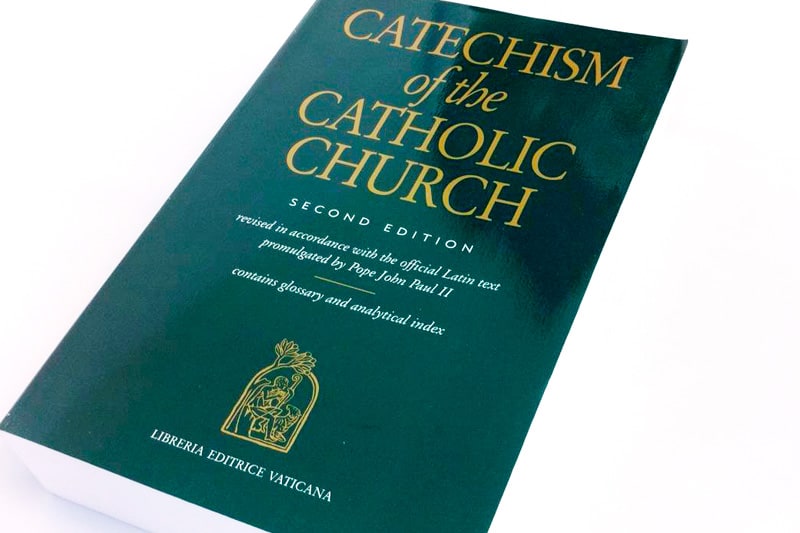 The Catechism of the Catholic Church is a teaching tool. It is a concise explanation of Catholic beliefs. The Catechism includes quotations from many papal encyclicals, church council documents, and the Scriptures. It refers to these as reference points for Catholic teachings. Although it is important, the Catechism is not considered a sacred text like the Bible. In fact, the Catechism we have now is fairly recent, although it describes ancient beliefs. The catechism helps to consolidate all of the Church’s teachings into a handy reference.

A Brief History of Catechisms

The word catechism has it roots in the Greek word katechizo meaning to teach by word of mouth. Prior to the invention of the printing press the primary method of communication was oral. It would have been impossible for the average person to have a copy of the Bible or Church documents. An early church catechist would speak a teaching of the Church and instruct the listener to repeat it until it was learned by heart.

The first Catholic catechism was written after the Council of Trent. It was published in 1566 and called the Roman Catechism. A new catechism was not created until 1994 called The Catechism of the Catholic Church. Other bishops in various parts of the world have produced catechisms, such as the Baltimore Catechism of 1885. However, there was not a universal catechism produced between the years 1566 and 1994.

The Purpose of the Catechism

The Catechism can also help our spiritual life because it is a clear, systematic, and comprehensive presentation of the essentials of the Christian faith. By meditating on the teachings of the Church, we can grow closer to God the Church proclaims.

Is there only one Catechism?

Not only can individuals learn about Catholicism from the Catechism, but also the Catechism can serve as a source for the creation of other teaching materials. Many RCIA (Rite of Christian Initiation for Adults) programs rely on the Catechism as the basis of their instruction for those seeking to learn more about the Catholic Church. Study materials can also be created based on the Catechism. These might include textbooks for use in Catholic schools or commentaries on the Bible in light of the Catechism.

Do Catholics believe the Catechism is like the Bible?

It is useful for unpacking the Bible and understanding the truths of the Bible. Through the Catechism we can learn more about Jesus and about God’s will for our lives. We can also see how the Holy Spirit has guided the Church when we read the Catechism, because the Catechism shows how Catholic belief builds on Scripture and the teaching of the Church over centuries.

Why update the Catechism?

You might wonder why the Church would update the Catechism at all. After all, doesn’t the Church claim that its teachings don’t change? Yes! However, our understanding of the revelation of Jesus Christ can develop. St. Paul would have said that Jesus is “consubstantial with the Father” if he were writing a Catechism. But at the Council of Nicea in 325, the Church discerned that saying Jesus is consubstantial with the Father is the best way of expressing the truth St. Paul knew: that Jesus Christ is God. “Consubstantial” showed exactly what we mean when we say Jesus is the Son of God. Likewise, the Church has developed new ways of understanding old teachings since the Council of Trent.

Furthermore, the current Catechism addresses issues that were not of concern at the time the New Testament books were written, or even at the Council of Trent. Issues like widespread abortion, nuclear warfare, and many others are specific to the modern era. The Church has things to say about these issues, and so a new Catechism was necessary to show what the Church teaches about these things.

How can I read the Catechism?