So the answer to the question, “What is the difference between Catholics and Christians?” in short is, “There are no differences. Catholics are Christians.” Indeed, Catholics believe that while other Christians are really and truly followers of Christ, the Catholic Church alone possesses (as a gift from Jesus Christ himself) the fullness of the truth Jesus came to reveal.

Even though Catholics are Christians, Catholics may seem very different than other Christians. Let’s look at some of these differences. Because most of the non-Catholic Christians you will meet are probably Protestants, we’ll focus on how Catholic beliefs relate to Protestant beliefs. While there are many differences, we will look here at two of the major ones: the role of Scripture and the role of good works. 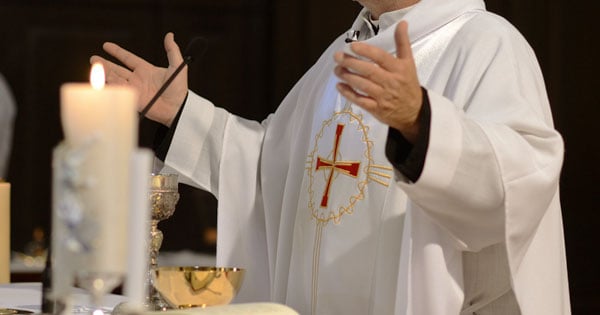 The Church “forcefully and specifically exhorts all the Christian faithful… to learn ‘the surpassing knowledge of Jesus Christ,’ by frequent reading of the divine Scriptures. ‘Ignorance of the Scriptures is ignorance of Christ.’” (CCC 133)

It is true that some Catholics do not know the Bible very well. The Church encourages all Catholics to read and learn more about the Bible. One way she does this is by presenting the Bible to Catholics at every liturgy.

The Bible and the Mass

Furthermore, the entire Mass has Scripture woven throughout. For example, when he elevates the Eucharist, the priest will say, “Behold the Lamb of God, behold him who takes away the sins of the world. Blessed are those called to the supper of the Lamb.” This echoes John the Baptist’s words in the Gospel of John: “Behold the Lamb of God, who takes away the sin of the world” (Jn 1:29). In the book of Revelation, an angel says, “Blessed are those who have been called to the wedding feast of the Lamb” (Rev 19:9). The people’s response (“Lord, I am not worthy that you should enter under my roof, but only say the word and my soul shall be healed”) is also Biblical: it is similar to what a centurion tells Jesus when asking Jesus to heal his servant (see Luke 7).

Another important and significant difference between Catholics and many other Christians is their theology of faith and works. One of the central tenets of the Protestant Reformation was sola fide, meaning “by faith alone.” What this means is that we are saved, or justified, by faith alone and not by works. Catholics, on the other hand, believe that both faith and works are necessary for salvation.

Many people, even many Catholics, misunderstand the Catholic Church’s teaching and believe that according to the Catholic Church, we have to earn our way to heaven. This is not at all what the Church teaches. Our salvation is a work entirely of God’s grace, but God’s saving grace requires a response from us. Faith is essential to that response, but so are actions (works). Actions are not just evidence that we believe. They are a key element in working out our salvation (cf. Philippians 2:12). In fact, the only time the words “faith alone” appear together in the New Testament is in the book of James, which says, “See how a person is justified by works and not by faith alone” (2:24).

Sola Scriptura and Sola Fide are often sources of debate between Catholics and Protestant Christians. Of course, there is far more to these debates than a short essay can convey. Despite these debates, be assured that Catholics are Christians! Like our brothers and sisters who are Protestant, we love the Bible, and we worship Jesus Christ as our Lord and God and trust in his power to save us.